I had another title all picked out for this post: It was going to be “An Interesting Week for the College Board” or something like that.  But after I typed the title, I realized that the College Board and the Catholic Church share a lot in common, at least from where I sit. (And this is a good time to reiterate that the opinions on this blog are mine, and may be influenced by my work, but are in no way an official or unofficial representation of the views of my employer.)

Both the College Board and the Catholic Church:

But this week, The College Board got most of the attention, at least if you work in education.  President David Coleman announced sweeping changes in the way the SAT is designed and administered.  You can read about them all over the web, but start here if you haven’t heard.

Reaction was swift, and came from all corners: Some thought the changes were a response to the ever-growing dominance of the ACT; there were the inevitable articles about “dumbing down” the test or American education in general; The New York Times appeared to trade private access for a flattering story; some expressed great faith that the new SAT will be all it claims to be, while praising the changes; while many simply said, “meh.”  The most strongly worded response came from Leon Botstein, the President of Bard College, who wrote in Time Magazine, calling the SAT “Part Hoax; Part Fraud.”

My own feelings are probably well known to anyone who reads this blog, and are admittedly a combination of hard research and personal observation:

But as I sat at my desk watching the webinar preview for representatives of college and university admissions offices, several things struck me as interesting:

And especially, this tidbit, from a slide in the presentation, which I’m saying is Fair Use, in case any lawyers are reading this (click on it to enlarge): 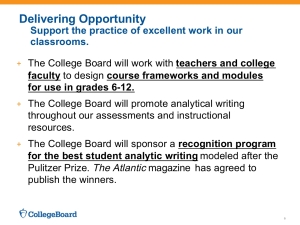 This may or may not strike you as new, but at the very least it should raise some questions: Who invited the College Board into 6th Grade?  And if they begin developing curricula for 6th grade, how will we know if it’s effective? A test, you say? Developed by whom?  Don’t hurt your brain trying to figure out this puzzle; the answer is obvious.

Thus, there is one more way the College Board and the Catholic Church seem to be alike: Even on those times you’re tempted to believe they’re doing something for the right reason, you always have to wonder what motive lies underneath it all.

Meet The New Boss, Same as the Old Boss

I am currently the Vice Provost of Enrollment Management at Oregon State University; what you see here is solely my opinion, and does not necessarily represent the viewpoint of anyone at OSU.

6 replies on “The College Board and The Catholic Church”

I so agree with your comments. I just feel like David Coleman and The College Board have an incestuous relationship with what should be taught in schools. They already dictate AP curriculum, why are they getting involved now starting with 6th grade? Other than for the sake of being able to develop and administer the tests to monitor the results – $$$$. Keep your opinions coming – they are great!

You’ve hit the nail on the head Jon, but this is no surprise to me!

Nice job – although at this point I’m tentatively hoping pope Francis is a real change agent, not so much faith In college board.

I’m enjoying the back and forth of our colleagues on this….

[…] enrollment management for policy and planning at DePaul University, writing on the SAT revisions in The College Board and the Catholic Church, first provides his feelings on college admission […]

I’m just surprised the College Board isn’t worried about K-6. Or is that next?

“Who invited them into the middle level in general?” may be a better question. The answer is still the same when more that 30% of our nation’s students live in states where CB’s Springboard curricula have already been adopted as the official state Language Arts and Math curricula.
http://springboardprogram.collegeboard.org
Add to that an undetermined number of school districts around the country, like Tacoma, that have also adopted Springboard, and you have a waiting market for the CB’s 8th grade test, ReadiStep, which is no doubt being given to 6th & 7th graders. Perhaps another apt comparison between the One True Church and the One True Gatekeeper would be to compare CCD and Springboard, each inculcating its frequently unwilling and usually unwitting young pupils with their own ways of thinking.