No, not the original.

Last night, as I was scrolling through the news, I saw this article, reporting on the statement by Harvard University on the Immigration Order issued by the president. 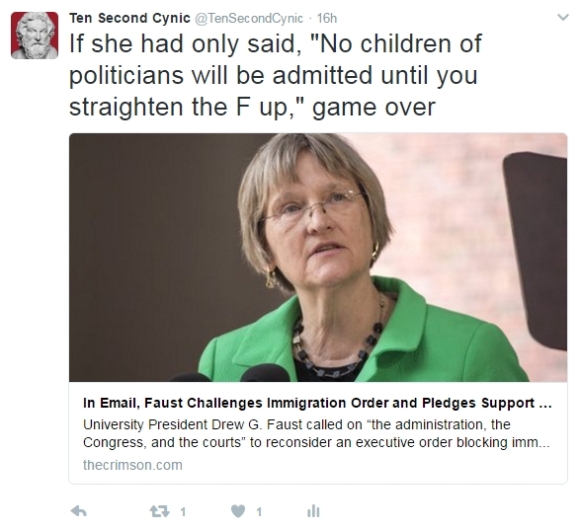 One RT, and one heart.  OK, no one got the joke except a constitutional law professor.

But then I thought, “hey, this should be a higher ed post,” so I tweeted out something similar on my “professional” (quotation marks added for emphasis) account:

This time, 22 RTs and 72 hearts (so far), even though it was hastily written and poorly worded.  In the words of the spiritual gurus, it resonated with my followers.  Even though it was (sort of) a joke.  Was this like the discovery of penicillin? Maybe, but probably not.

But seriously, let’s think about it.  What if the Ivy League and the ten or 15 wannabes all got together and decided no children or grandchildren of congressmen or White House staff would be admitted until those two bodies started acting like decent, civilized human beings who are looking out for the good of the country, rather than their own political interests?

How long would it take?  And, how much better would the classes at those institutions be because of it in the interim?

If you can ban people from entering the US based on where their parents live, you can certainly ban them from admission to private universities based on how their parents act.  (Note: I’m not a lawyer and in all probability you can’t do either.  But this is a personal blog, not a treatise on the constitution.  Go to SCOTUS blog or some other high falutin’ web site for that.)

What do you think about this whimsical Utopian idea?  Leave a comment below, but remember, I have to approve them.  Dissent and reasoned discussion is welcomed.  Use of the word “libtard” or similar verbiage will get your comments dumped.

I am currently the Vice Provost of Enrollment Management at Oregon State University; what you see here is solely my opinion, and does not necessarily represent the viewpoint of anyone at OSU.

7 replies on “A Modest Proposal, Redux”

I understand the idea and smile at the thought, but it doesn’t seem appropriate to punish the children of these politicians. Just as we say that Barron Trump should be off limits to comedians because it isn’t his fault who fathered him, these politicians’ kids had no say in whose family they belong to.

In some cases, these children might end up with a much better match…

If we can extend to the grandchildren and extended family as well that would help a lot!

I think this is a great idea. If it weren’t for political stature, many of the children might not even be considered in the first place. While there are certainly rigorous educational requirements to be met in almost all cases, I’m sure there are more than a few students who have gained admission based solely on who their mother/father is, when someone who was more qualified was denied.

Interesting. Allowing a few assumptions, if colleges implemented your idea right away, it would ensure one full ignorami-free graduating class. Speaking only in theory here. I agree; it’s not the kids’ fault.

This has serious merit. I would also take it one step further and apply the restriction to all state of Illinois elected officials. Our state is even worse than the national government.